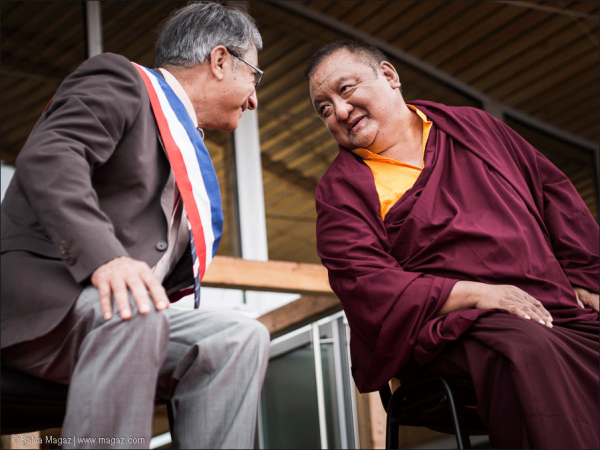 It’s a good idea. On the occasion of the fortieth anniversary, let’s assemble the mayors and other elected officials who have participated Dhagpo’s live starting from its creation, and let’s have them share their vision of this story, one a bit out of the ordinary for them.

We will see, while it wasn’t always easy, each of them took it as an opportunity for the region.

The preparatory meeting: To prepare a discussion that aims to be informal and open is a bit paradoxical. Spontaneity isn’t a thing you prepare! But this first meeting was necessary to clearly define the meaning and feel of the April 6 event. So they we were at the table with the mayors of Montignac, Saint-Léon, Plazac, and Lez Eyzies. All of whom have since moved on from the post. Jean-Guy was present as president of DKL and Yann as well. I moderated the discussion.

It didn’t take long for the gears to get moving in our memories. We started with the center’s founding. Everything came back: the center being perceived as a cult at the time, the dirty hippies, the fragile people, the first fire, the Tibetans we didn’t know how to communicate with… Strength is being able to state that Dhagpo’s creation didn’t occur without hardship.

Then, over the course of the discussion, it becomes clear that 1985 was the beginning of a turning point. Dhagpo opened toward the outside with the first annual open house, Buddhist children began attending local schools, and business in the area began to benefit from the center’s activity. “We even saw monks playing bumper cars in Plazac, and they were having fun too!” We even touched on the development of the real estate market based on the fact that numerous Buddhists came to live in Dordogne.

We arrive at the present. The Institute marks the mind: there is the form of the building—“I compare it to a giant turtle,” the inauguration with officials and representatives from other religions—“This shows how much Dhagpo’s presence in the region has become deeply anchored…at present, trust is completely established.”

But I got taken by surprise when we brought up the future. “Dhagpo is an important interlocuteur,” and also, “Dhagpo is in the right place.” So then we discussed the wishes of the community of counties: to take responsibility for the mosaic of cultures that make up the region and develop tolerance and openness. We were on the same page. It’s important to know that Plazac comprises around 25 nationalities for its 700 inhabitants…

An hour and a half of discussion to confirm that Dhagpo has not been without impact for these mayors and their counties. Looking at the past up close, at Dhagpo’s different phases, these mayors have always been a support for the center. Giving them the chance to speak is a way to express our gratitude toward them.

Toward the end, we asked them their advice for the future of the center, particularly concerning what stumbling blocks to avoid. The ideas were clear and precise.

Come one and all, April 6, at 4:00 pm in the Institute, to meet them and see Dhagpo on a special day.

To find out about upcoming events, check out the program.