Day 4: Practice with the Karmapa 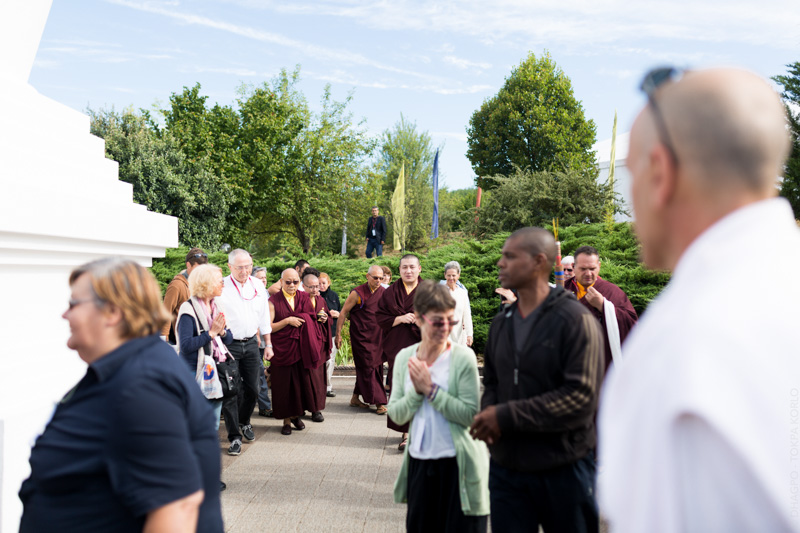 Thursday, July 30.  This morning, Thayé Dorjé, His Holiness the XVIIth Gyalwa  Karmapa began the day with a few turns around the stupa to the sound of the gyalings. Around gathering of people followed him, delighted to have this opportunity to unite their wishes with that of a great master – the stupa rarely sees a crowd of this sort!  Then Karmapa made his way up to the great tent accompanied by an even larger following. In this year marking the 40 years of Dhagpo, the exceptional visit of Karmapa focuses mainly on practice.  One of his wishes in fact was to accomplish meditations with all the practitioners collectively and that is precisely what he focused on the last two days of his visit. So, on the program today:  put the instructions and the empowerment given the previous day into practice, or at least train….!  The day is thus oriented, once more, towards developing compassion through Chenrezig practice:  two sessions of practice in the presence of Karmapa, one in the morning, then again in the afternoon. 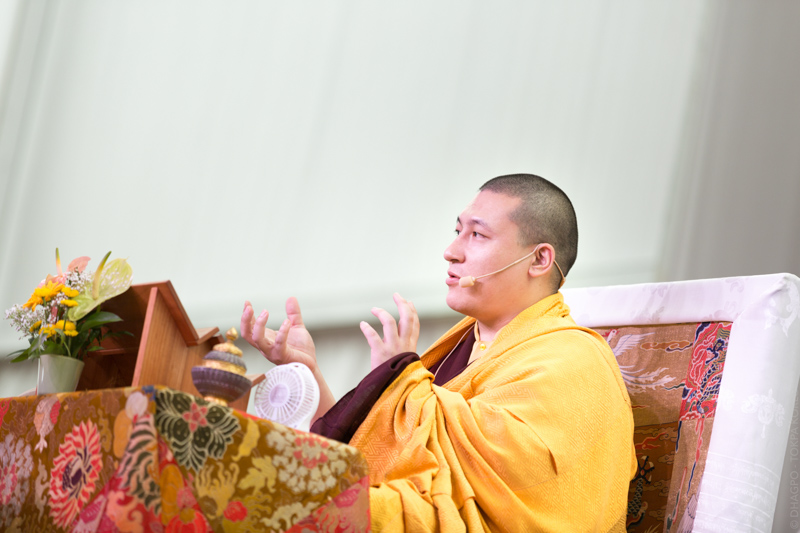 Before the umzé – the person in charge of guiding the ritual through song – begins his role, Karmapa once again gives a few precious instructions, imparting upon the listeners the assistance to Chenrezig practice as he himself received it.  He truly emphasizes the importance of turning our mind towards the lineage which assured the transmission of this meditation in an uninterrupted manner starting from the Buddha through to our present day.  The lineage is what has kept it alive.  If we can recall all the masters from the past which participated so that we may practice today, we can develop confidence.  As the Karmapa points out, we can realize that it is not just a fantasy, but a method which truly functions.  Having such an understanding, a real inspiration develops:  the intention to heed their example and follow in their wake.  In fact, from a spiritual point of view, we are like small children: to progress, we have to imitate the masters – and there, Karmapa makes reference to their way of acting, to what they practiced, not their character or personality.  In order to advance on the path and cultivate more and more qualities, the secret is repetition.  This is both very beneficial and very important.  It is part of the process through which we all have to go.  To make this point clear to the listeners, Karmapa makes a comparison to cooking:  we have to follow a recipe to the letter, then train, again and again until the result is satisfactory.  Karmapa also remarked that another tendency we generally have is to consider spirituality as something extraordinary, hence placing it out of reach.  Somehow, we separate it from the rest.   But it seems as though this approach leads us to something mechanical, stopping us from seeing things as they really are.  It blocks us, which is really a shame since it is contrary to the goal of our practice! 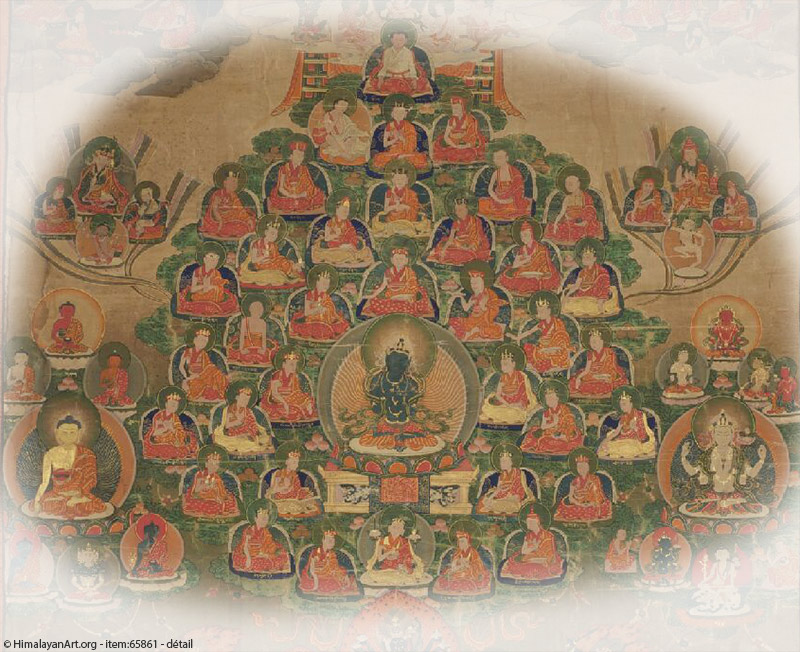 Karmapa then specifies the meaning of the different types of practice – those which are linked to masters (guru yoga) and those which are linked to yidams like Chenrezig.  The practice of the master allows us to know his qualities – here it is a question of enlightened qualities which can germinate in each being.  The yidam practice allows us to enter into contact with these qualities since it is precisely what such a meditative support represents, through its numerous symbols.  The two practices are complementary because even if the yidam itself embodies the qualities we are striving to deploy, we need a master who has had experiences similar to our own, thus more accessible, and be inspired by his journey.

Then Karmapa gives a last piece of advice:  before undertaking Chenrezig meditation, it is good to take a few moments to simply cultivate compassion, to sincerely feel it.  For that, we can recall a moment in our life when we felt it – through the form of affection towards someone dear to us for example.  Cultivating such a state of mind can help us avoid a difficult transition between daily life and formal practice; the passage from one to the other will become more natural. 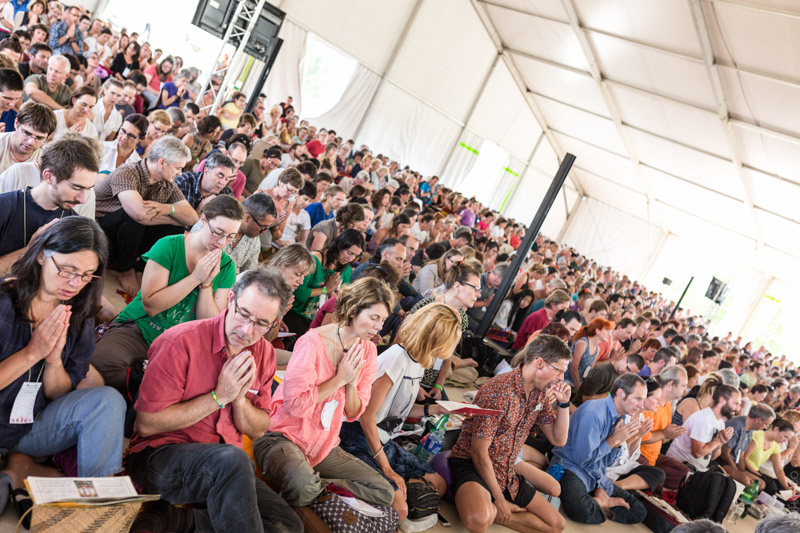 The umzé’s chant now rises, bringing all present with him in the rhythm of his melodious voice, waving through the syllables.  All together the assembly recites these famous words charged with profound meaning.  The sound produced by these hundreds of people is all at once powerful, soft and enthusiastic.  It becomes suddenly much easier to imagine oneself surrounded by beings, as indicated in the ritual.  In general, we say that a practice is more effective if done in a group.  What can one say about a collective meditation on love and compassion performed by… 1600 people? And moreover in the presence of an authentic bodhisattva, a truly exceptional occasion!  Never-the-less once does not make a habit; this good fortune will repeat itself the following day, last day in the presence of Karmapa… 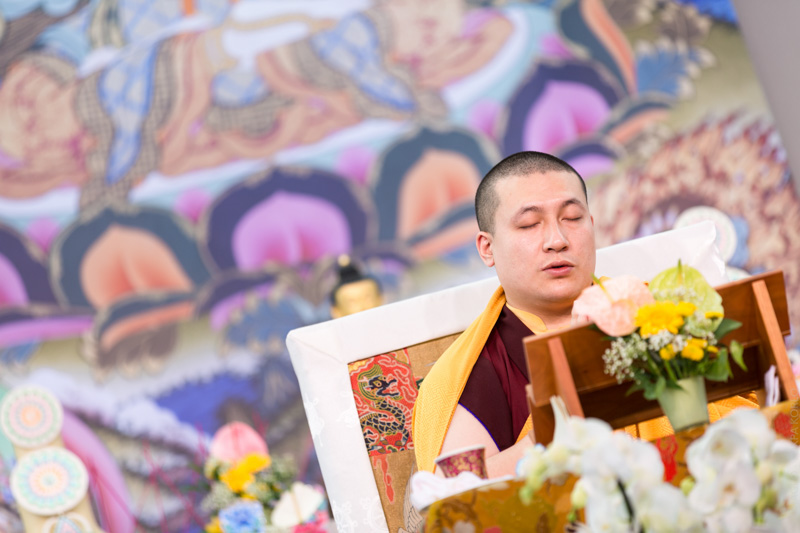