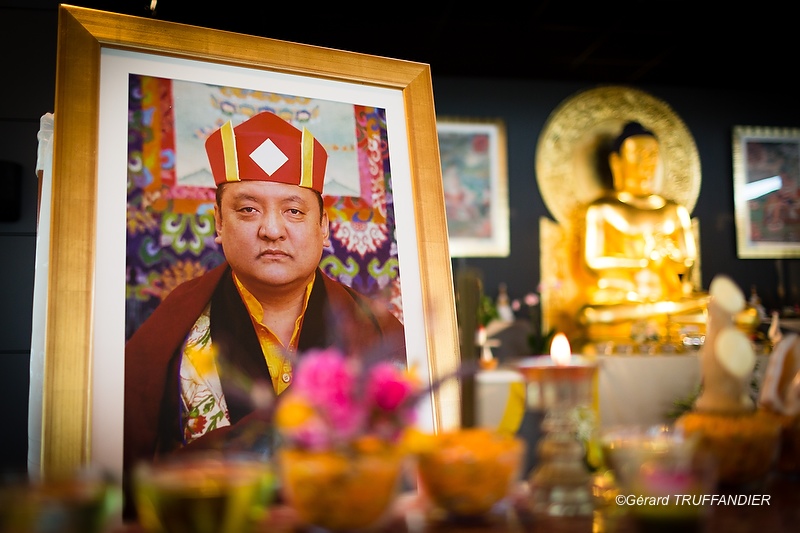 More than one year after Shamarpa’s departure (June 11), as we approach the anniversary of his cremation (July 31), his memory remains as bright as ever in the minds of all those who had the opportunity to meet him—many times for certain among us. Few people had the chance to know him as well as Trinley Rinpoche who, having known him from early childhood, accompanied Shamarpa on numerous voyages throughout the years. Wednesday July 8, he accepted the invitation to share his memories as he did, more than one year ago, in Renchen Ulm.

More than two hundred people came for the event, which took place in the main teaching hall of the Institute that, let’s remember, was inaugurated just two years ago by none other than Shamar Rinpoche. As Dhagpo’s history would certainly not be the same without the activity of this bodhisattva who, despite his busy role as co-holder of the Karma Kagyü lineage, took it to heart to visit regularly and give teaching and empowerments. This year, 2015, marks both the first anniversary of Shamarpa’s departure as well as Dhagpo’s 40th anniversary, and is thus the perfect occasion to consider Shamar Rinpoche’s work, for the center and for the good of beings, with gratitude and to remind oneself of all he taught and transmitted. 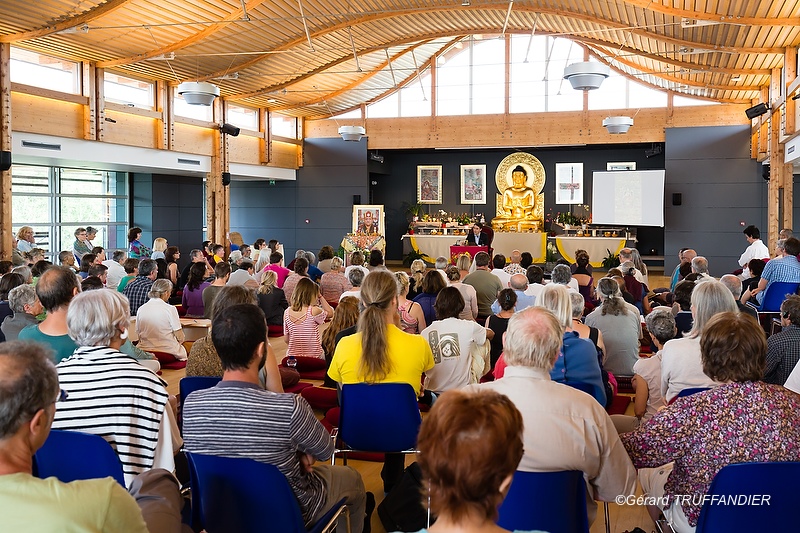 In the great hall of the Institute, a large photograph of Shamar Rinpoche stood on a throne before an altar set especially for him. On the far side, to the left of Trinley Rinpoche’s seat, various photographs and images of tankas appeared on a projection screen to illustrate the account of Shamarpa’s biography. Trinley Rinpoche begins speaking in a long, low voice before an audience seemingly rapt and already engrossed. Over the course of three hours, he evoked the life of the 14th Shamarpa, from his birth in Tibet in 1952 up to his death last year in Germany. As a good orator, he does not omit the necessary historical context of the Karmapa lineage—the first to have institutionalized succession via the tülku system—as well as the Shamarpa lineage. Then, he paints a portrait of Shamar Rinpoche as precisely as possible, describing his activity throughout the world, explaining the difficulties he faced, depicting some of his many qualities—presence, simplicity, confidence, kindness…but all this is nothing like a historical recitation empty of feeling: here, it is a disciple who speaks of his master as he knew and observed him! Sweet or surprising little stories add detail the thread of Shamar Rinpoche’s biography. 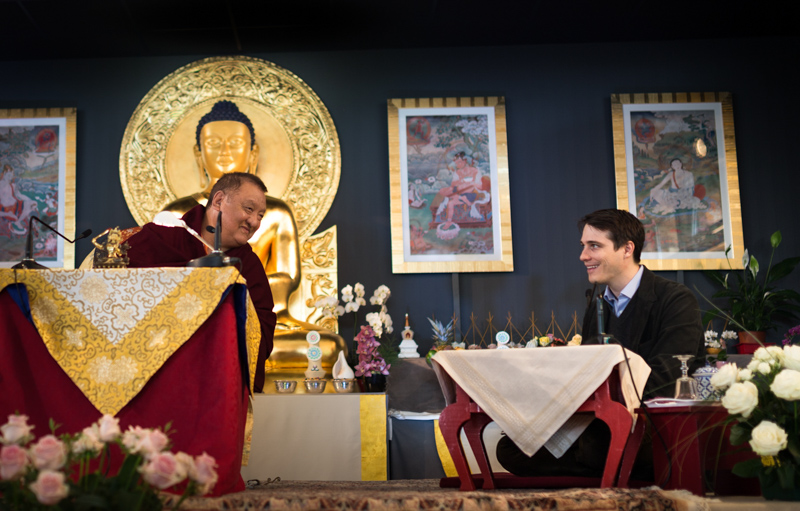 The audience is concentrated. From time to time, a few laughs ripple the silence here and there; those who remember Shamar Rinpoche are visibly moved by what they hear. In the mind of each listener, personal memories must be mixing with those shared by Trinley Rinpoche. At times, Shamarpa’s biography takes on the air of a teaching, as Trinley Rinpoche evokes the nature of mind, reminds us of impermanence, or once again slips in a reference to precious human existence and the importance of putting it to use now. 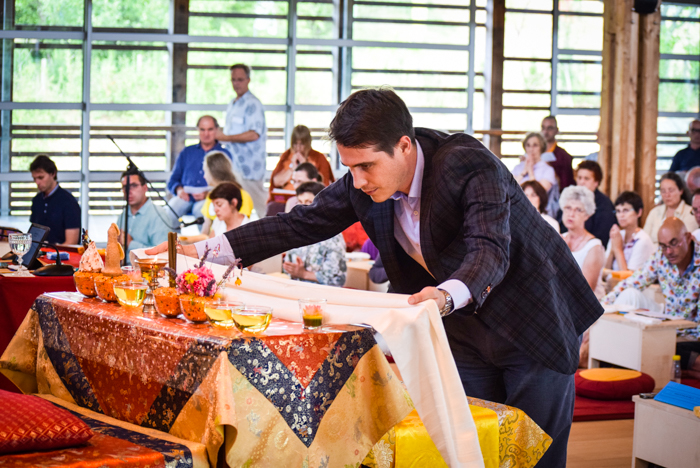 The homage continues in the afternoon with a Q&A, which allow the audience to claridy certain points brought up in the morning’s account. Then, to conclude this day of reflection and memories, the group recites together the Wishes of Excellent Conduct (Samantabhadra’s Wishes)—the famous “King of Wishing Prayers” for which Shamar Rinpoche gave a commentary. The aspiration prayer is followed by an accumulation of the prayer for Shamar Rinpoche’s swift rebirth—for this is what allows us to cultivate the predisposition to once more be in contact with his grace—while those present pass before his altar to offer a kata. The Prayer for Rebirth in Dewachen and the traditional dedication seal this day of homage.

It is often said that knowing a master’s life story allows one to develop trust—in him and in the teaching. On this day, Trinley Rinpoche offered this gift to several dozens of people who, what’s more, had the inestimable opportunity to meet, in this life, the bodhisattva known as Shamar Rinpoche. 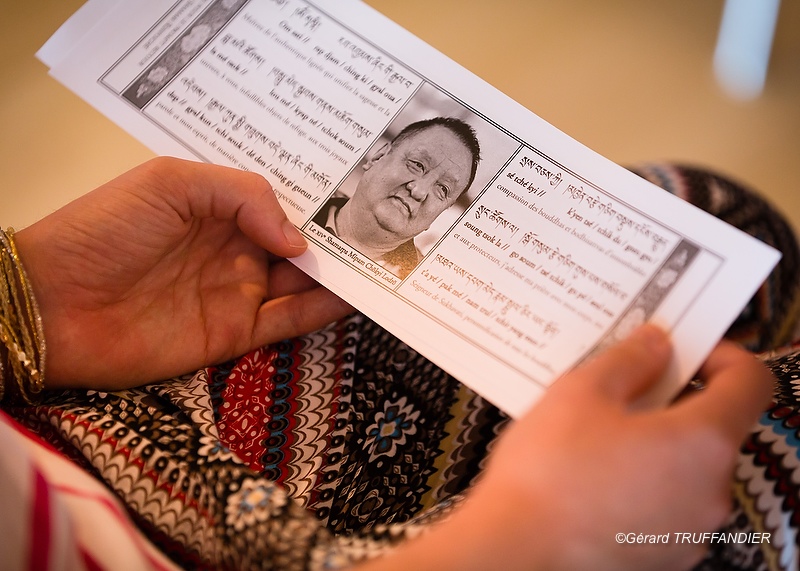