A Reunion for Lama Jigme Rinpoche and Monsignor Le Gall 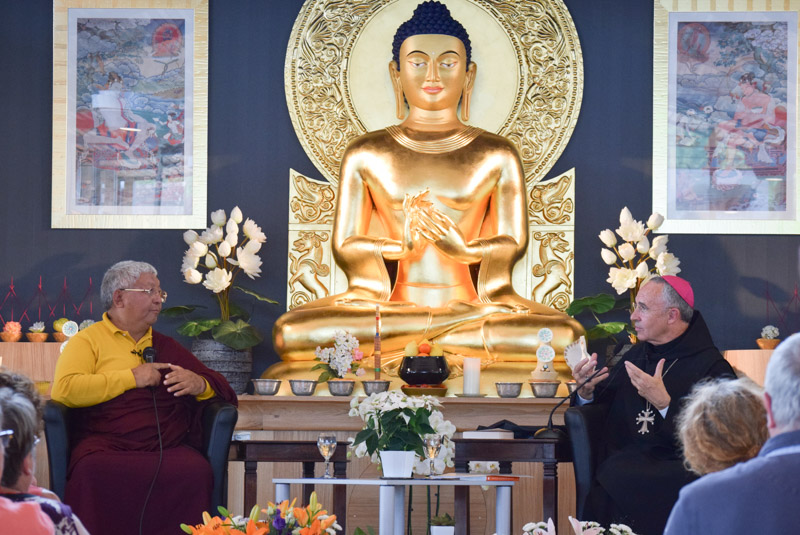 Let us remember the principal vocation of the Institute : the sharing of knowledge, notably through exchange, conferences, and round tables. This is, in effect, one of the five wishes expressed by the 16th Karmapa in order to allow for the Buddha’s teaching to sustainably take root in Europe.

On August 16th, the Institute’s teaching hall hosted an interreligious dialogue. Here, two monks who known each other for many years had the opportunity to reunite : Lama Jigme Rinpoche, Dhagpo’s spiritual director for the forty years of its existence, and Monsignor Le Gall, archbishop of Toulouse. The event wasn’t so much an encounter as a reunion for the two men, as they had already collaborated during the writing of Le Moine et le Lama (The Monk and the Lama, 2001). Though they have not had the opportunity to meet in the last ten years, the two men have retained the ease of discussing their respective traditions. Lama Jigme Rinpoche mentioned recently taking pleasure in exploring “the nature of God or life after death” with Monsignor Le Gall (1). 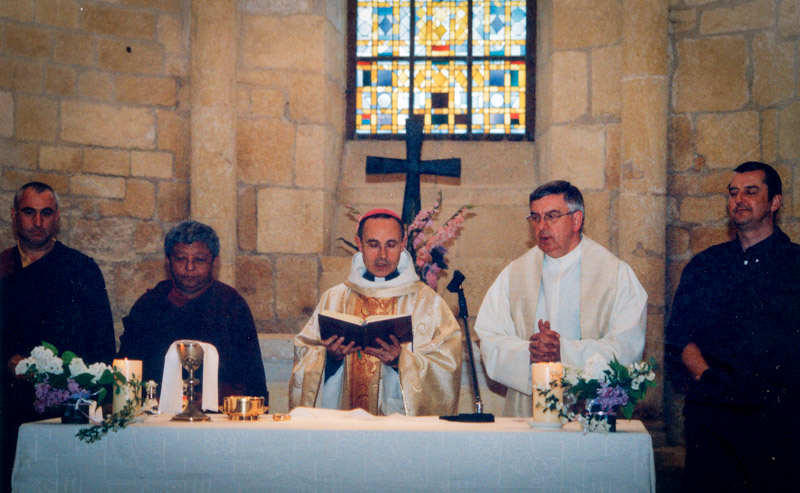 As the event took place the day following The Assumption — the Catholic holiday celebrating Mary’s being taking into Heaven, body and soul, without facing physical death, at the end of her life — the theme of exchange appeared naturally : liberation, though the term rings much more Buddhist than Christian. The day of, Lama Puntso moderated the exchange ; through his questions on various aspects of the subject, he set up the framework for Lama Jigme Rinpoche and Monsignor Le Gall to express the views of their two traditions. If at times there were points of resonance, the goal was certainly not an attempt to make Catholicism and Buddhism agree, nor to “convince” one interlocutor or another. The objective was to become more open, to create harmony, and to better understand each other. 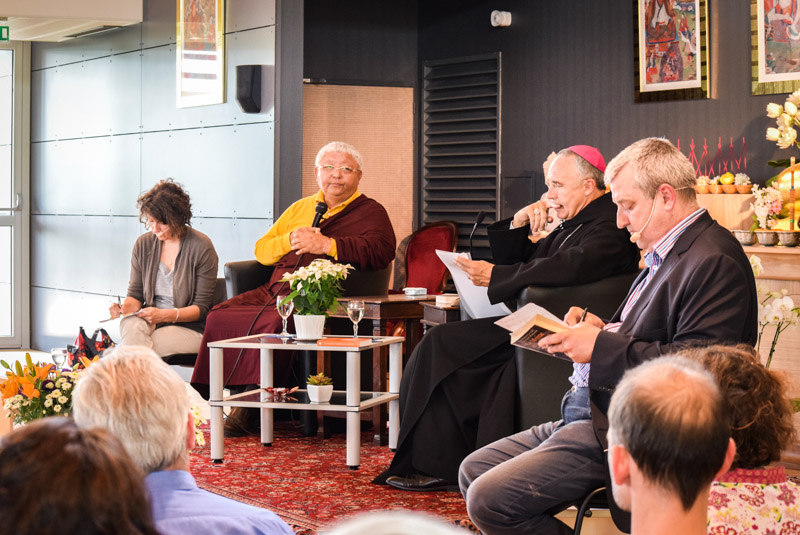 After having requested each speaker to situate the context in which they could discuss liberation within their respective tradition, Lama Puntso led the two participants through the themes of freedom, compassion and miséricorde, suffering, the spiritual path, commitment, the relationship to the Buddhas or to God, prayer, spiritual influence, which could be correlated to divine grace, and finally faith. It is a spirited debate, punctuated with complicit laughter from the audience. Similarities arise naturally among the two discourses — on the themes of altruism or the wish not to suffer, for example. We discover, at times with surprise, that certain words are “false friends” from one tradition to another ; if blessing refers to spiritual influence in Buddhism, Monsignor Le Gall speak more freely of ethics in his turn (“to speak well” is the literal meaning from the roots of the French word for blessing, “bénédiction”). To conclude the exchange, the result of each path is evoked ; for a Catholic, this entails a divine life, fullness, and for a Buddhist, it consists of that which is beyond suffering, the state in which the potential of wisdom is perfectly actualized. “Nothing less than full !” specified Monsignor Le Gall ; “for us, that would be : nothing more than emptiness !” replied Lama Puntso with good humor. 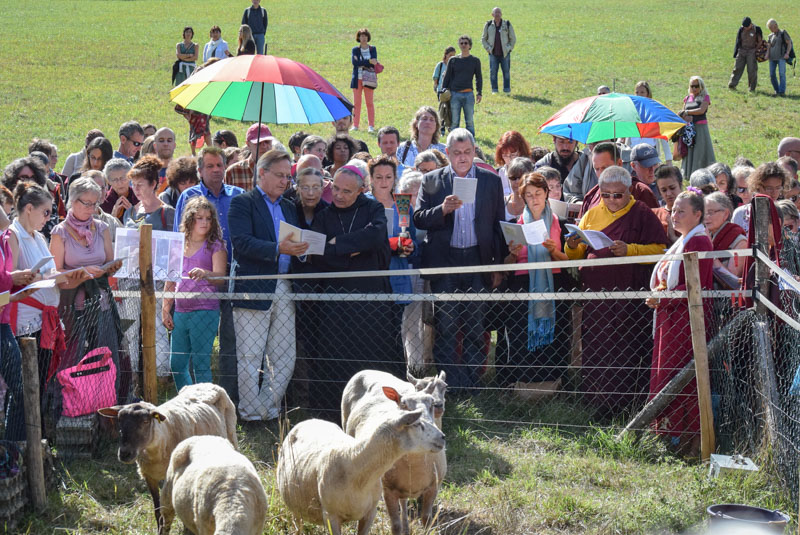 During this day of sharing, Monsignor Le Gall put into practice a bit of advice from the Buddha, that which tells us to, “honor another’s belief though we do not share it.” Towards the end of the morning, he took part in “Saving Lives”, a practice which has nearly become habitual during this year of Dhagpo’s fortieth anniversary. The stars of the ritual this time were five sheep renamed Kimberly, Adelaïde, Raymonde, Marguerite, and Antoinette for the occasion, in acronym K.A.R.M.A, a wink at the beneficial karma we accumulate thanks to them. Saved from the slaughterhouse, they will finish their days peacefully at “Noah’s Ark” refuge, an association located at Sourzac, which takes care of over 150 animals. As in the past, numerous people came together for this practice, which gives us the opportunity to develop greater awareness and kindness toward all sentient beings.

The gamble of the day paid off : this new meeting between Buddhism and Catholicism allowed, according to Jigme Rinpoche’s words, to “dissipate confusion a bit and open to peace.” The public was quite taken with this “spiritual promenade.” As for its two leading men, they look forward to keeping in touch and continuing the process of exchange whenever the occasion presents itself. As Monsignor Le Gall emphasized, apparently quite convinced by Dhagpo’s fortieth anniversary slogan, it seems obvious that “our connections shape the future” ! 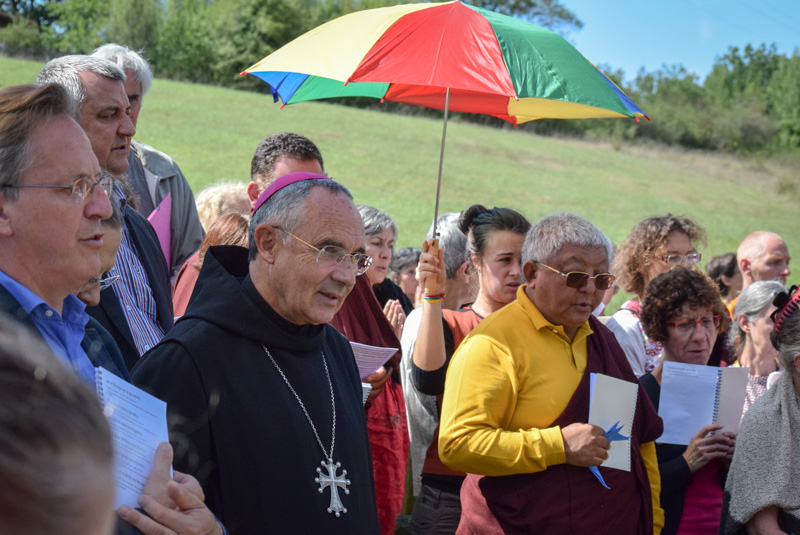 To support an animal in the care of “Noah’s Ark” download the form here (in French).