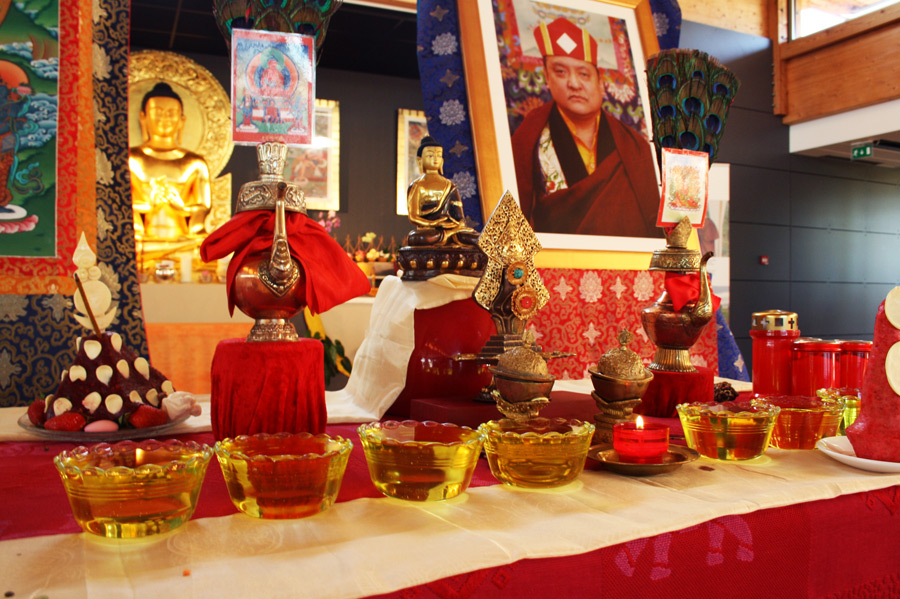 Celebrating an anniversary is a group affair. We gather together around an event in order to nurture a shared memory. The reminder, the awareness, the gratitude that we practice individually in this way become collective. This is why the celebrations of the first anniversary of the parinirvana of Kunzig Shamar Rinpoche are important for all of us, Karmapa’s sangha.

As we have already expressed: the departure of the manifestation of a highly realized bodhisattva like Shamarpa is a great loss for the world, for everyone. Gathering together to practice on the occasion of this anniversary is important for several reasons.

Karmapa told us several months ago, “The time of mourning has come.” Commemorating a departure allows each of us to integrate the loss, and to grieve in his own way. But this is not the heart of the matter. The most important aspect is to generate the conditions for Sharmapa’s return. We need his physical manifestation, his “tulku” (body of manifestation). Of course his activity is continual; it is much vaster than the personage of Shamarpa that we knew and wish to meet again. Nevertheless, we also need this physical support. The much-awaited manifestation of the 15th Shamar Rinpoche is also the guarantor of the continuation of the Kagyü lineage, in the same way as Karmapa. It is their commitment as bodhisattvas for the benefit of beings: preserve the heritage of Gampopa, the lineage of Mahamudra, preserve this jewel in its authenticity in order to make it available to as many people as possible.

For all of us, commemorating the departure of Shamarpa means generating the causes for his return, his swift return. On this occasion, at Dhagpo, we are practicing Vajrayana meditations together (Amitabha and Gyalwa Gyamtso) and particularly festivals of offering (tsok). In addition to the blessing that these practices carry, they are the source of great merit, what Thaye Dorje calls the life force of the mind. Furthermore, group practice of the tantras exponentially multiplies the benefit accumulated. Gendun Rinpoche often explained to us that if three of us practiced Chenrezig at the same time, but each one in his own house, it was of course beneficial, but it would be vastly more so if the three got together in the same location to meditate on the divinity.

Obviously, not everyone is able to come to Dordogne to join these celebrations—there are two: June 2 (Tibetan calendar) and June 11 (Western calendar). But during these two days, throughout the world where Buddhism is practice, people inspired by the dharma and the Kagyü lineage will gather together to, in one way or another, assemble the causes and conditions for the return of this master teacher. One can, on this occasion, practice Chenrezig, accumulate the prayer for swift rebirth composed by Thaye Dorje, or accomplish the ritual of Amitabha, of which Shamar Rinpoche is an emanation. At Dhagpo, these two days will be consecrated from morning to evening, but each individual is welcome to offer the time that he can. Small streams make great rivers. This action will be beneficial for those who carry it out and by the force of wishing prayers and dedication, for all beings.

When we say that the activity of highly realized bodhisattvas is inconceivable, transcends time and space, this is not just an image. Nonetheless, this activity is subject to the openness of ordinary beings, its deployment depends on the faith and merit accumulated by each individual. One day, the Buddha and Ananda, his disciple were walking together; they crossed paths with an old woman. Ananda asked the Buddha why he did not help her. The Buddha replied that it wouldn’t do any good as the causes for this to be possible were not present. Ananda insisted. The Buddha went towards the old woman, and turned to speak to her. She turned away. The Buddha turned to face her and spoke to her again. She turned away once more. And so on, several times. Ananda was forced to give in to the evidence; in Buddhism, there is no savior. The Buddha set forth all conceivable (and inconceivable) means to aid beings, but the path depends on each of us.

The two days commemorating the departure of Shamar Rinpoche are for all of us yet another opportunity to nurture the connection, to create the causes, to bring together the conditions to once more be able to—and as quickly as possible–meet a personification of enlightened activity: the 15th Shamarpa.