Homage to a Valiant Heart 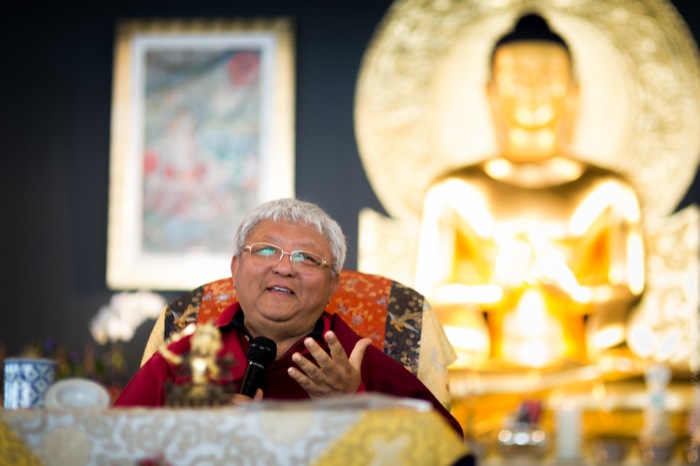 He is that rare kind of bodhisattva who deploys an activity without it being visible. Such bodhisattvas are sometimes compared to the air, which is all around us, imperceptible, and yet beneficial for all. Jigme Rinpoche is one of these bodhisattvas.

He grew up close to the 16th Karmapa. From his earliest youth up until twenty-one years of age, he receives all of the Kagyü transmissions from the Karmapa along with the most important tulkus of the lineage. Later on, he continues to receive transmissions from such masters as Gyaltrul and Gendun Rinpoche, as well as Nyingma masters such as Dilgo Khyentse and Dudjom Rinpoche, just to name a few. When Karmapa requested him to come to France as his European representative, it was planned that he stay for five years…forty years later, he is still here. This shows us the example of how this master remains ever a disciple. Today, he is the disciple of the 17th Karmapa, Thaye Dorje, for whom he serves as general secretary.

Taking part in Jigme Rinpoche’s activity is a continuous practice. It is a clear source of inspiration, at times unexpected. His answers to our questions push us towards autonomy. He guides us towards seeing our mistakes and gives us the space to transform them. The ability to question oneself, responsibility, stability, and kindness; this is what one can learn from his teachings and his written works.

Over the course of discussions here and there with different people, one sees how his compassion manifests in the most unexpected of situations. When he, on his way back from Paris by train, brings with him two ducks and a rooster to prevent them from meeting their death. When he returns from a trip to Germany and we learn that he gave an initiation to more than 5,000 people. When, after a journey in Asia, he remarks that, in his role as Karmapa’s general secretary, he set straight various management problems in a monastery. As well, during the inauguration of Dhagpo’s Institute, when we surprised him handing out plastic bags for shoes to latecomers at the entrance to the teaching hall. We are well aware of his fidelity to those connected with him and his capacity to confront his disciples when necessary. Nothing at all ordinary, despite appearances, in an unceasing activity in service of others and of the dharma.

Our Connections Shape the Future

Dhagpo’s fortieth anniversary celebrates Karmapa’s activity in France and in Europe. Gratitude! We cannot forget all that Gendun Rinpoche accomplished. Gratitude! Of course, there is also the support of benefactors, volunteers, and course participants. Gratitude! But the cog at the center of it all, throughout all these years, has been Jigme Rinpoche. At times in the shadows when the circumstances demand and at times in front of the flashbulbs when needed, he is there.

For this August course that brings us all together with him, we wished to make it a celebration of his activity. He will teach and practice the Guru Yoga of the 16th Karmapa with us, a practice that unites devotion and meditation, of which he is a paragon. He will transmit the initiation of the 15th Karmapa; he waited until the necessary circumstances came together in order to offer us this transmission. He will dialogue with Monsignor Le Gall, archbishop of Toulouse; through his exchanges, he shows us his knowledge of our culture. We will practice life release; a practice he has carried out regularly for many years now. He also requested that, during this course, Qi Gong training be offered to help with meditation posture; he is attentive to all of our needs as practitioners. And finally, according to his passport, he was born August 15th; we will celebrate it in the spirit of supporting his long life.

The 16th Karmapa said of him, “In the form of Jigme Rinpoche, I leave you my heart.” The quote is well known. “Jigme” means “intrepid.” Jigme Rinpoche has a vast heart, valiant and of an intelligence that never ceases to surprise us.